The Rt. Honorable Speaker of Parliament Rebecca Kadaga (seated) presided over the Dialogue

May 18th of every year is commemorated across the globe as the HIV Vaccine Awareness Day. This day is an opportunity to recognize and thank the many volunteers, community members, health professionals, and scientists working together to develop a safe and effective HIV vaccine. It is also a time to raise awareness or educate communities about the importance of HIV vaccine research and provide updates on the progress in the HIV vaccine research field.

HIV Vaccine research efforts are directed towards developing both preventive and therapeutic vaccines:

2018 marks the 21st anniversary of HIV Vaccine Awareness Day (HVAD). In Uganda the HIV Vaccine Interest Group (VIG), whose membership is drawn from research organizations that are carrying out HIV vaccine research in Uganda (MUWRP, UVRI/IAVI, MRC/UVRI and LSHTM Uganda Research Unit), has been celebrating the day with a number of activities.

This year, the VIG partnered with the Uganda Parliamentary Forum on Quality Health Service delivery and held a high level dialogue on Tuesday 5th June, 2018. Scientists representing VIG shared updates about the global and Uganda’s progress in HIV vaccine research. The dialogue, also provided an opportunity for scientists and politicians to discuss Uganda’s role in the search for an HIV vaccine. This occasion was graced and presided over by the Speaker of the Uganda Parliament, Rt. Hon. Rebecca Kadaga.

The activities started with opening remarks given by Hon. Herbert Kinobere, the chairperson of the Parliamentary Forum on Quality Health Service delivery who appreciated the VIG partners for organizing the dialogue and urged his fellow parliamentarians to actively participate and also called for their un-divided attention and attendance.

Dr. Hannah Kibuuka, the Executive Director of the Makerere University Walter Reed Project (MUWRP) highlighted the rationale for the continued search for an HIV vaccine. She pointed out that although HIV incidence is declining, the rate of decline is slow to facilitate elimination of HIV. “1.4 million People in Uganda are living with HIV, with 67% of adults on anti-retroviral therapy and only 47% children on antiretroviral therapy. 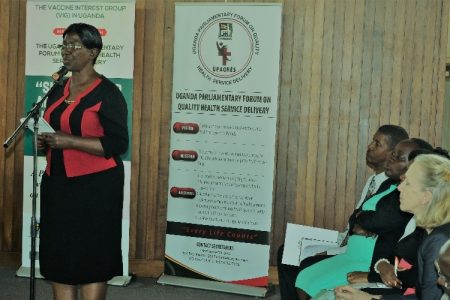 Speaking about the progress made in HIV vaccine research, Dr. Francis Kiweewa, the head of research and scientific affairs at MUWRP, informed the parliamentarians that since 1998, Uganda has participated in several Phase I and Phase II vaccine trials, but had never conducted any Phase III trials. “Globally not many vaccine trials have reached to Phase III clinical trial, a stage that leads to licensure of candidate vaccines”, Dr. Kiweewa said. “Actually since 1998 only 5 HIV vaccine candidates have reached Phase III, and only one of the 5 (the RV144/Thai study) achieved some level of success, providing needed evidence that an HIV Vaccine is actually possible”, he continued.

Dr. Kiweewa, also hinted at the renewed hopes that scientists currently have in the efforts to discover an AIDS vaccine.

He explained that since the Thai study, the global HIV vaccine family have been working tirelessly to improve the RV144 vaccine trial results and pointed out the 2 ongoing vaccine clinical trials in Phase III, both conducted in Southern Africa where investigators and scientists across the globe are optimistic that from these clinical trials the world can have an HIV vaccine or at least get very good knowledge of improving the next vaccine. He said that, “The results from the ongoing trials will be very helpful in the global efforts to develop an HIV vaccine”. Dr. Kiweewa added that one of the vaccine candidates in phase III in South Africa is testing a mosaic strategy to target majority of the circulating HIV types thereby overcoming the mutation characteristics of the HIV virus. 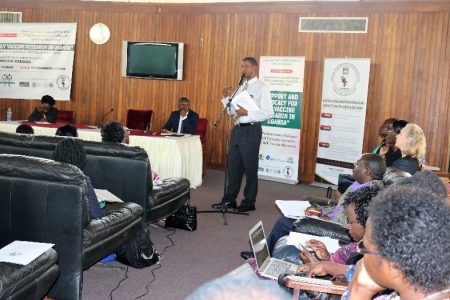 The parliamentarians were also greatly excited to learn from Dr. Kiweewa’s presentation that Uganda participated in the build up to the Phase III trials that are being tested in South Africa, because some of the early phases of the same trials were conducted here in Uganda.

Dr. Kiweewa summarized his talk by advocating for increased funding from the Ugandan government to support bio-medical research. He shared that, “about 80% of the funding for academic research comes from the outside countries, and the remaining 20% comes from internally generated revenues at the various Public Universities. The dependence situation is even worse with biomedical research where almost less than 1% of the funding is received from within the country”.

He requested the members of parliament to increase Uganda share research funding to biomedical research from the local revenues as well continuing to advocate for funding for HIV vaccine research as a way of increasing hope for an HIV vaccine.

Prof. Kaleebu highlighted the burden of HIV and the challenges associated with ARV drugs, emphasizing the importance of continuing the work towards an HIV vaccine. He cited the difficulties faced by people who are infected with HIV and who must take medications daily; the frequent stock outs experienced and the high rate of ARV drug resistance which occurs in at last 10% of people on ART.  This means that there are many individuals who must take 2nd line ARV regimens which significantly increase the cost of HIV treatment. 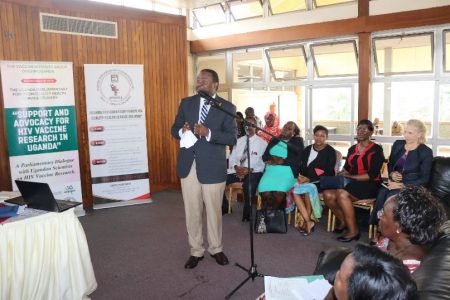 To sustain the HIV prevention efforts and to be able reach the goal of completely eliminating HIV, Prof. Pontiano advised that there is need for an HIV vaccine. He encouraged the members of parliament to become advocates for HIV vaccine research.

The parliamentary dialogue was organized to increase awareness about HIV vaccine research in Uganda and to advocate for the will of Ugandan legislators to locally support HIV research. The event was attended by a number parliamentarians, researchers from the institutions that subscribe to the vaccine interest group and members from the media fraternity.